Laxmi Baug, Dharavi - The Stillness Within

Exploring a neighbourhood with many surprises

In a detour from our usual explorations of Dharavi’s arts and crafts, we visited the Laxmi Baug Chawl which is located near the 90 feet road in Dharavi. It is in the immediate neighbourhood of the erstwhile ‘Kela’ Bazaar, a wholesale banana market, which has now transitioned into a garment market. Approximately seventy years ago, the residents of the Laxmi Baug Chawl were displaced from the Dadar Station Road to make space for road widening. Initially, the chawl was occupied by government officials, military, and police personnel. The current residents of Laxmi Baug work in different professions and in different parts of the city.

To enter Laxmi Baug, one has to pass the busy Kela Bazaar. Previously, this market was immediately outside the chawl, surrounded by multiple godowns for storage. Making it a bustling street as there was a constant movement of goods via large vehicles. Due to the rapid development of this area like most of Dharavi, now it has become a much calmer street as the bigger vehicles are unable to move around as easily as before.

Certain features seen in the Laxmi Baug are unique to this chawl. They show a completely different character than the rest of the areas in Dharavi.

The houses here are not the Tool houses that we generally see in and around Dharavi but are a contrast to them. They are single-story or G+1 structures used almost entirely as residential units. The facades of these houses showcase the once-popular wooden outward-opening windows and doors with ventilators on top. Till up to 20 years ago, such houses, with double-sided sloping roofs could be found in most chawls. But with time, rapid development, and space crunch these old styles have gradually disappeared. Most houses that are seen now are G+2 structures, with sliding windows and other features that have come about as solutions to present-day issues.

Furthermore, the houses in Laxmi Baug are linearly organized on either side of a wide central road. This spatial organization of the houses thereby forms multiple small and larger open spaces, which is one of the most unique features of the chawl. These spaces have become multi-utility areas that are used for community gatherings, festivals celebrations, or a day-to-day meeting space for the residents, a rarity in its high-density context.

These pockets of open spaces create a comfortable environment for people to sit and gather around due to the presence of multiple trees and shrubs, making the surroundings cool and shaded. Adding on the presence of niches and otlas around these trees enhances the unique character of Laxmi Baug further. Such community gathering spaces existed in all chawls 30 years ago, but with a change in demand and scarcity of space, they have been converted into go-downs, storage spaces, and shops.

Another unique feature Laxmi Baug showcases is the presence of a single entry. Confined between a railway track and a dead end on two sides, the chawl is not a thoroughfare and has a much lower footfall. All these factors make the chawl a much calmer and quieter space when compared to other chawls in Dharavi.

Despite the housing densities around Laxmi Baug, the neighbourhood itself has retained its own character. The existing site conditions, history of the neighbourhood, and the closely-knit community all contribute to making Laxmi Baug stand out from the other ever busy and bustling neighbourhoods of Dharavi. 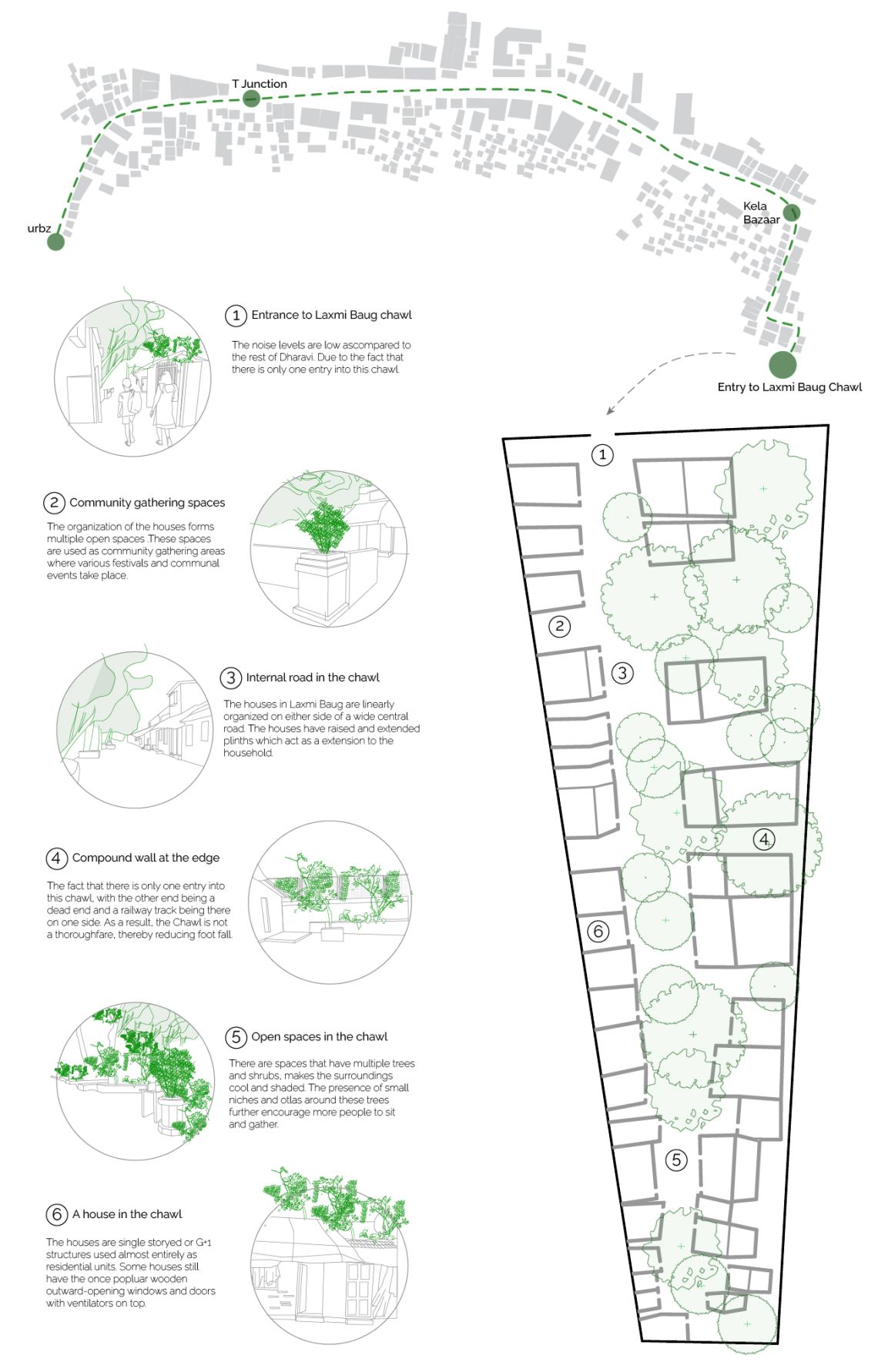