Initially, it was difficult to get people’s trust and visit their homes. Little by little we got to know each other and we started understanding the way people live here. 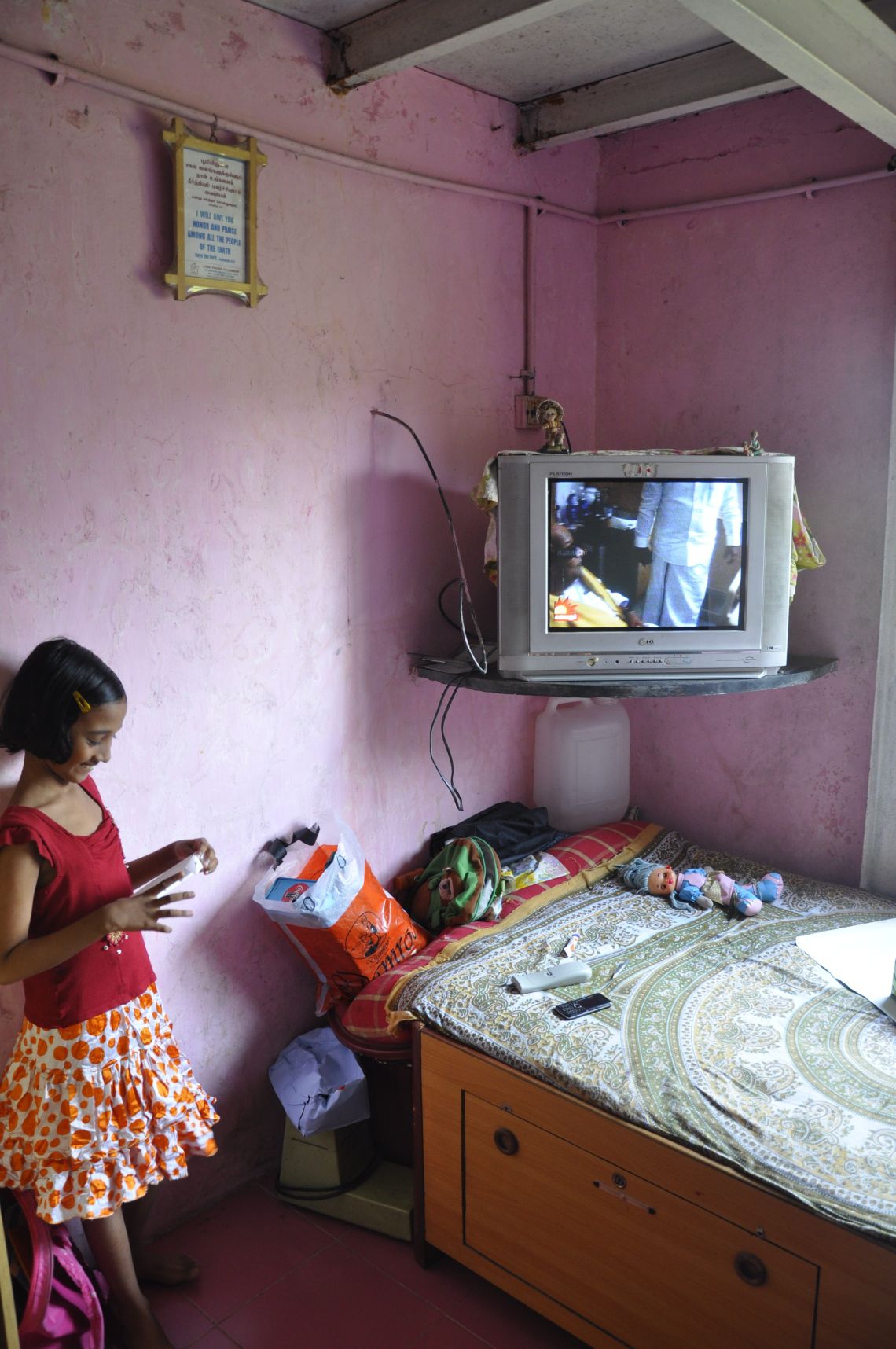 Our  time spent in Mumbai  is already over… it went so fast! Here is some of the output.

We worked on the URBZ building, measured each floor and drew the entire structure. We have to thank Rahul, Matias, Himanshu, Venkatesh, Bhau who have helped us during these  three weeks.

We produced a simple architectural board to show the initial stages of our work. We have given a print of it to each family living and working in the building and one will be kept in the URBZ Office.

On  Saturday 9th October, we had the chance to present our study in Dharavi in front of 50 architects from White Arkitekter AB who were visiting from Sweden. There was also a great exhibition of pictures taken by children from New Transit Camp (where the URBZ office is located). 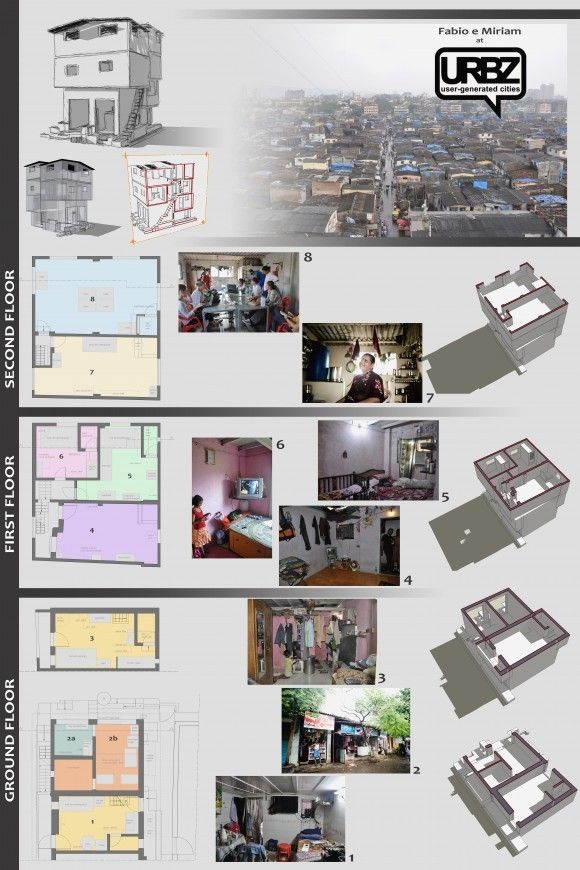 On the board we have tried to show, in a very simple way, how the building is structured:

16 people live here (plus someone who sometimes sleeps in the URBZ Office).

Initially, it was difficult to get people’s trust and visit their homes. Little by little we got to know each other and we started understanding the way people live here. Architecturally, each space is pretty small (8 to 18 m2) and the facilities are basic.

This building is on the main road in the New Transit Camp neighborhood, Mahatma Gandhi Road. This road is intersected by  small lanes. This is the only part of Dharavi which has a gridded layout, since it was once a planned transit camp. The lanes are 1 to 3 meters wide on the ground. The upper floors of the buildings often touch each other as they eat up every available space. Consequently, the lanes often lack  light and ventilation.

The water is usually stored in tanks (from 250 to 500 liters) that people keep over the bathroom space. In the ground floor apartment  the tank is positioned in the small lane next to the house. In that same lane there is a pump, which is hand-operated by the owner once a day for one hour, early in the morning. It fills up the tanks in each flat. Water is included in the rent.

People use this water for drinking, washing, cleaning and cooking. All toilets  are located on the right-hand side of the building in order to get access to the pipes which bring fresh water and evacuate used water.

Water comes from municipal pipes, which run on the side of the streets. One of the main issue in Mumbai (not only in Dharavi!) is that these pipes often run next to the sewer, which is an obvious concern about contamination. 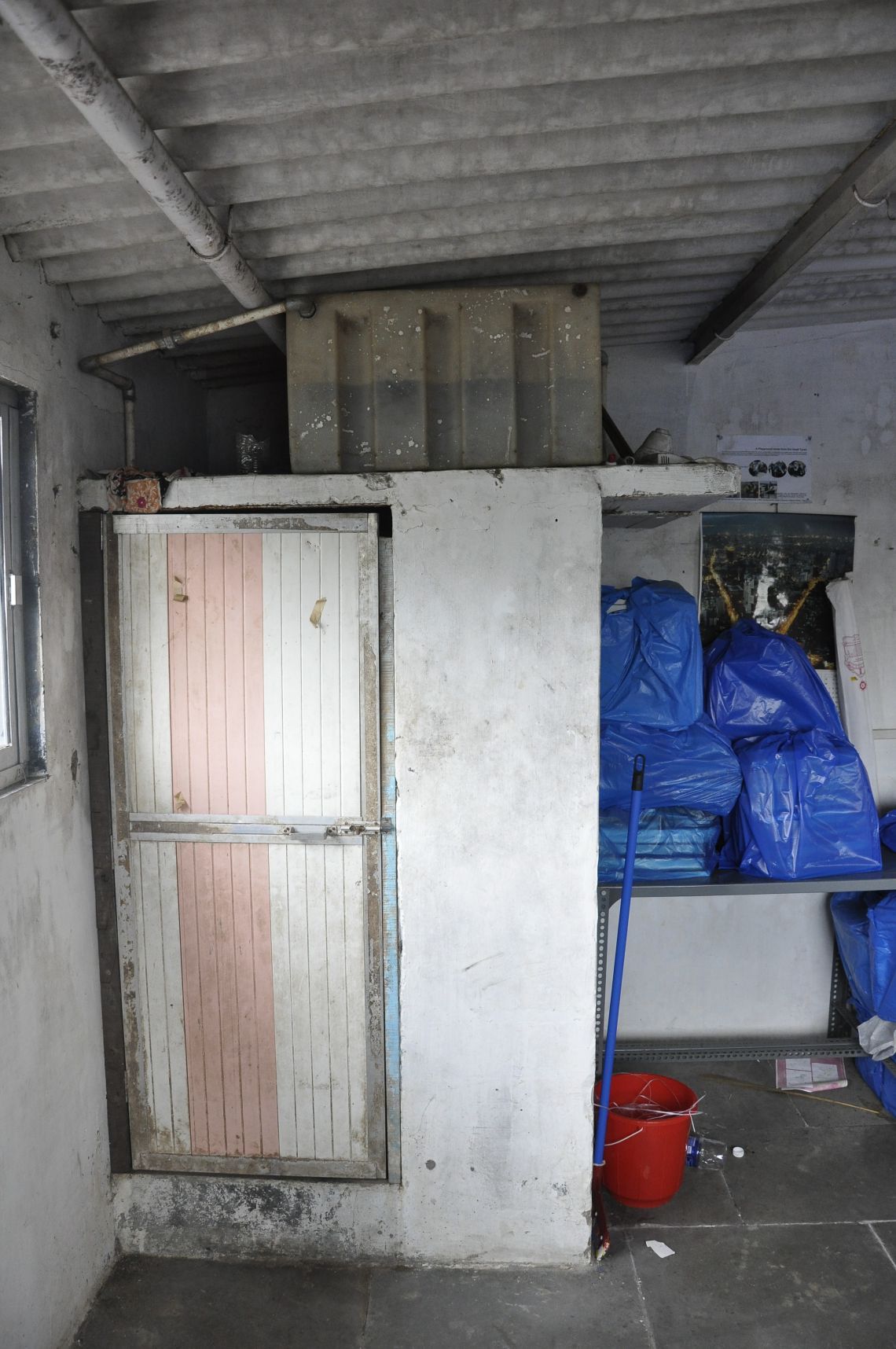 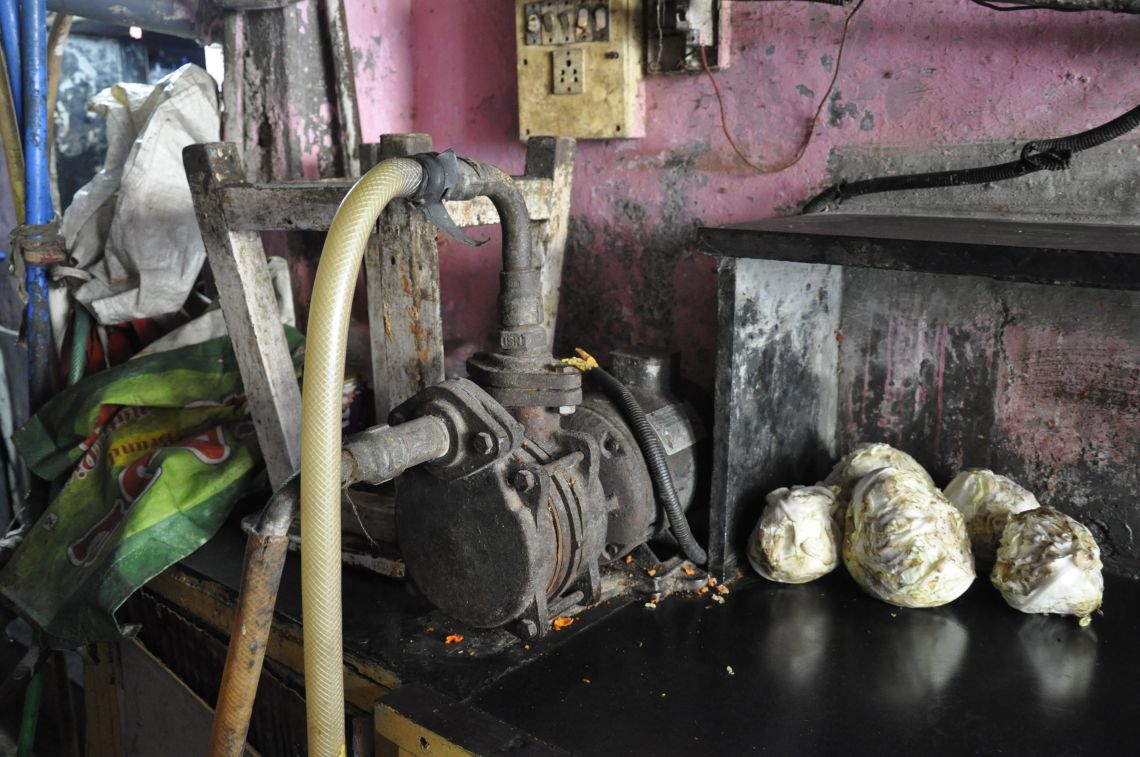 Each house has electricity and each blocks on the lane has an electricity meter to which all the cables are connected. This comes from the New Transit Camp initial infrastructure, which was provided along with one story high houses). These were first converted into permanent living spaces and then developed into working spaces. The neighbourhood now has buildings up to four stories high. 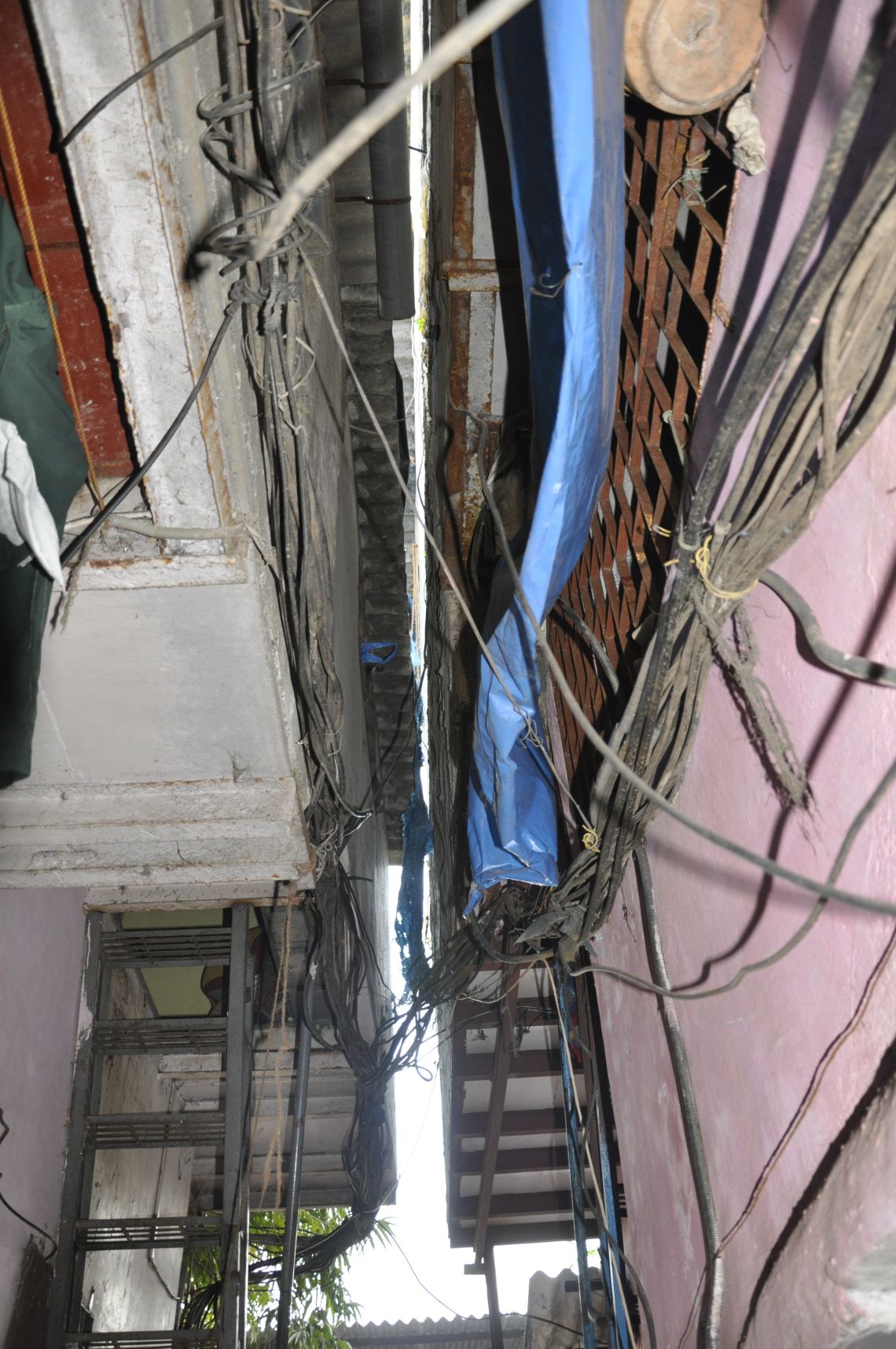 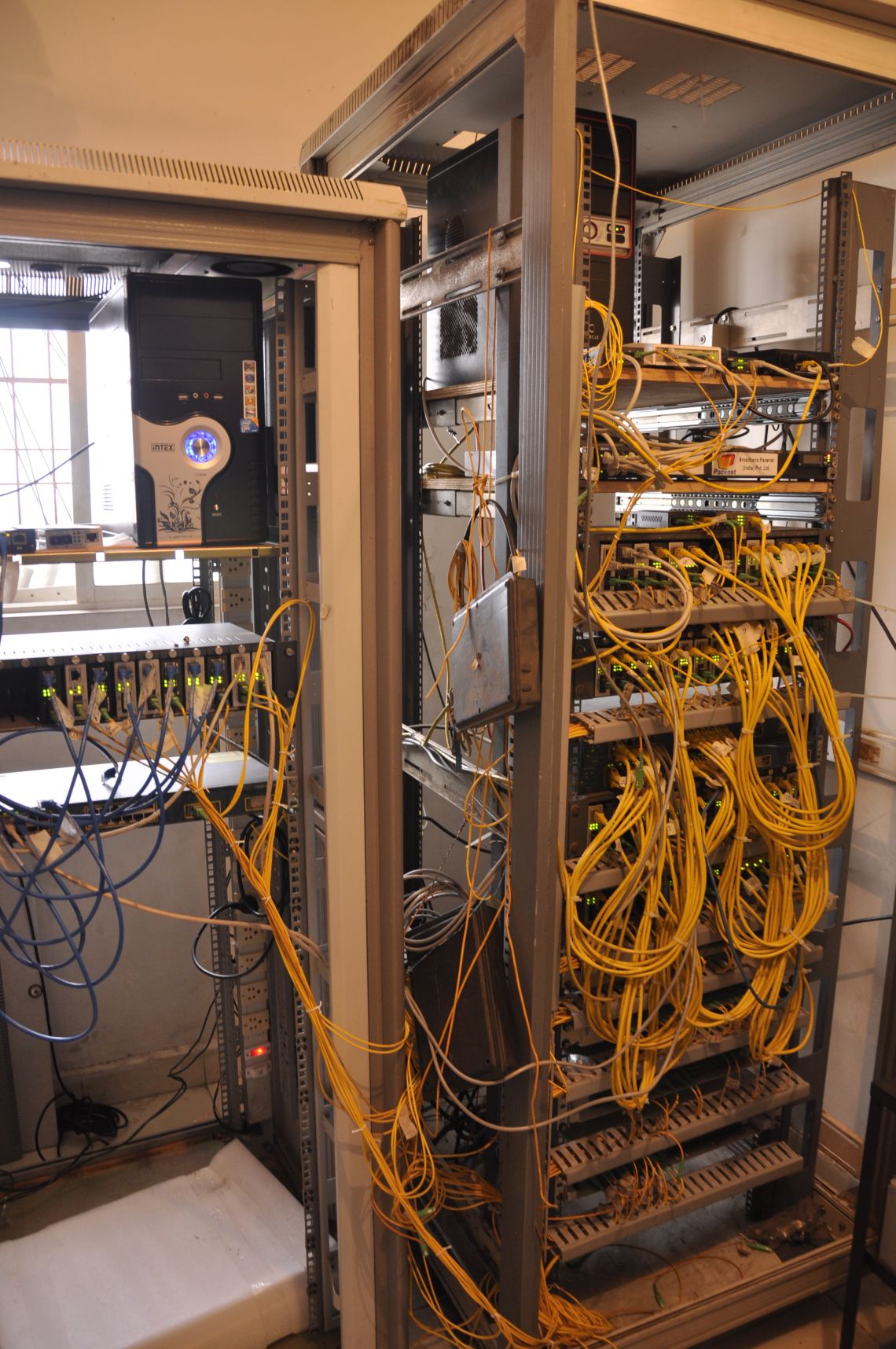 We have also discovered that TV cables and Internet connections (when they exist) are not just flying loose in the intricate web of cables stretching from building to building. They all end up in a control room located on 90 Feet Road. All the cables converge to the top floor of a tower building where they are controlled.

After spending time talking to people and trying to understand the way they live (thanks to our interpreter and friend Venkatesh), we have discovered a complex set of relations that gives lives over here some qualitative aspect that are usually difficult to find in such a big city.

Each person knows their neighbor well, the doors are always open when someone is inside, the outside space is a natural extension of the “private space”, the small lanes and the street are public spaces in which relationship are created, maintained and consolidated over time. A village/community lives in each of these buildings!

Would all this be possible in the 20-25 story building proposed by the Dharavi Redevelopment Project?

People here are asking for innovative solutions that can respond to their basic needs : cheap and good construction materials, minimum living spaces, privacy and spaces that allow relationships to continue to be strengthened.

Are we, trained architects able to design responses to these needs without destroying these neighborhood?

Pictures of our survey of New Transit Camp: