Our mission is to continue to facilitate the development of creative initiatives in this space and collaborate in the connections of people to places – in this case a vibrant neighbourhood that is currently being planned without its residents’ participation. 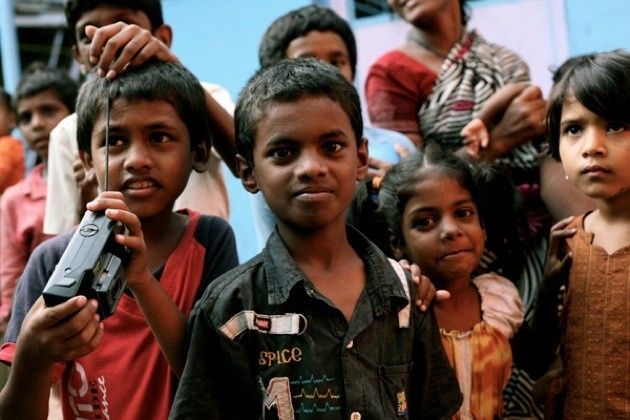 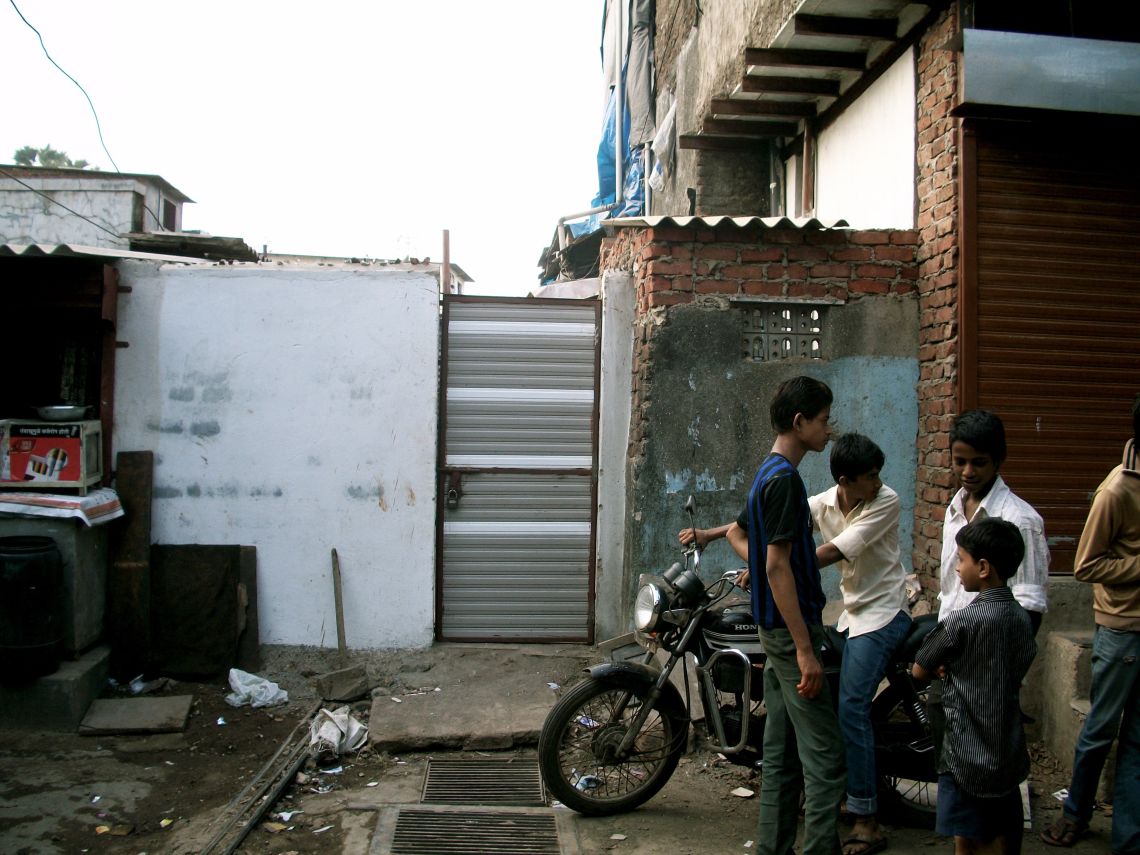 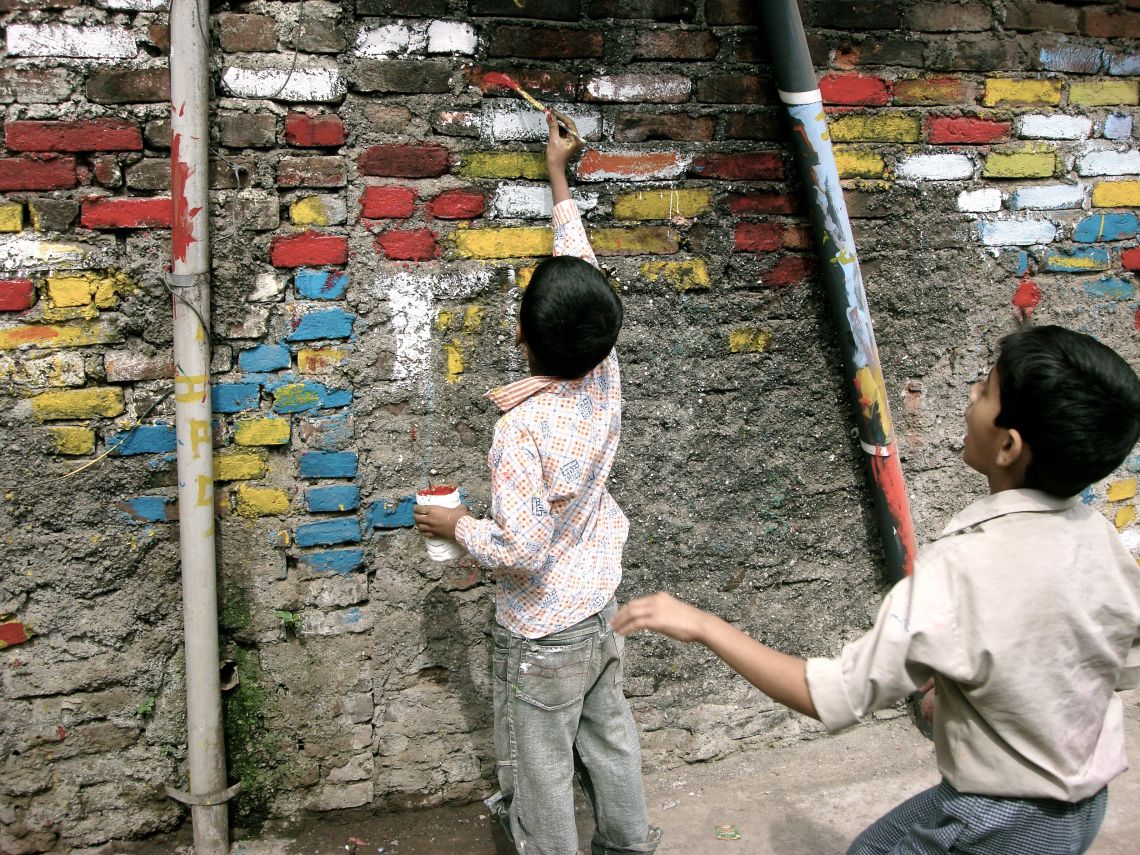 The following text is a documentation of a neighbourhood in Dharavi, closely connected to URBZ, that has taken steps to nurture its local youth by providing them with a creative space and the tools to learn a variety of invaluable life-long skills. This contribution will briefly showcase the inception of the Shelter at Dharavi, the processes that formed the backbone of its vision, and the children who have embraced the project’s outputs and are beginning to take advantage of the new activities available to them.

The Shelter at Dharavi came into being through a locally-based initiative that was aimed at embracing the children living in New Transit Camp, Social Nagar. A local resident who had been active in the community felt that a particular element was missing; a space for youth to congregate, exchange ideas, create art, play, and learn. His idea was to create a new centre that would be accessible to the community’s youth. The centre would not only provide a space to meet but also a number of organized activities that local children would otherwise not have access to.

Through this grassroots process, the Shelter began to take its root. As the ideas and plans for the centre matured, a decision to construct a building on a recently inherited local plot was made. The local resident who took on the leadership role chose to approach URBZ, asking them to participate and assist local residents in the construction and realisation of their vision. This partnership was welcomed and the subsequent construction of the Shelter as well as the organization of the activities took on a collaborative and participatory methodology.

Soon after the creation of this partnership the Shelter wasted no time in quickly establishing itself as a community hub. A simple building was constructed and soon thereafter the local youth began to fill it. Several volunteers began to work with the Shelter, providing local children with art lessons and other fun afterschool activities. Throughout this time the children and their parents were consulted on what types of programs they would like to see at the Shelter. The results of this simple consultation process called for a fun publicity event, which would soon give way to a great deal of interest in the Shelter from both local residents and individuals from outside of Dharavi. The publicized event would take place over two days and would fittingly be called, Dharavi 48. 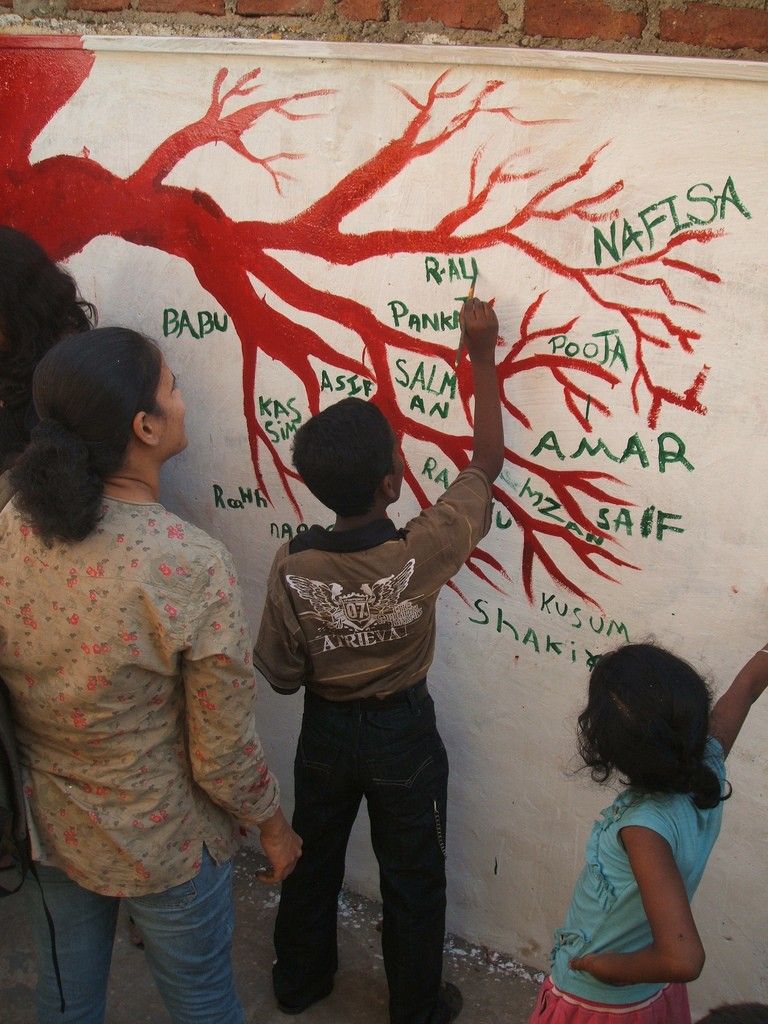 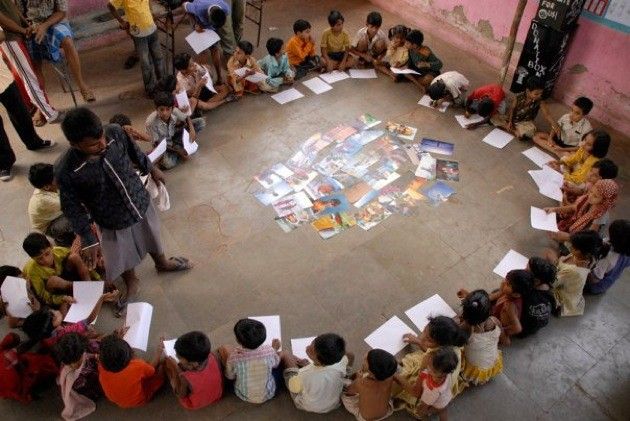 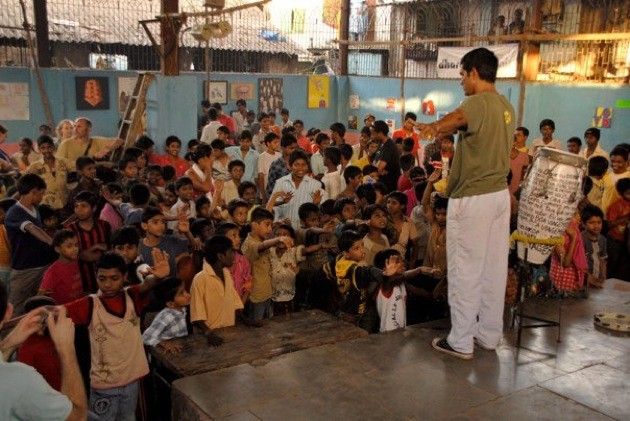 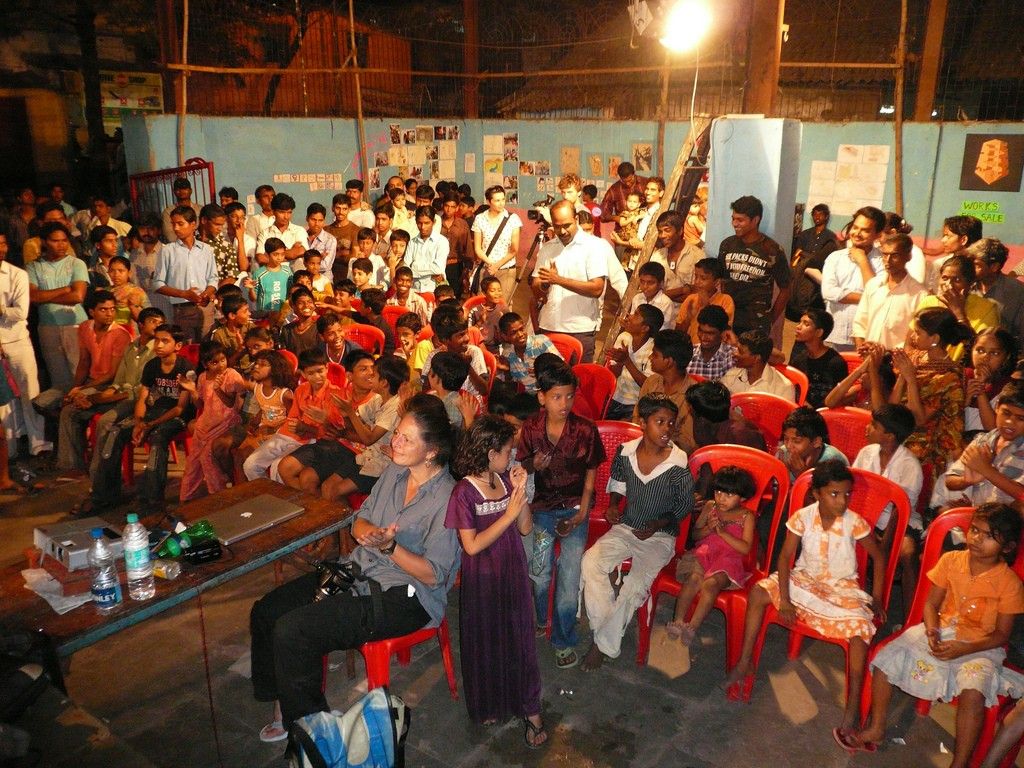 Dharavi 48 sparked a great deal of interest from surrounding communities and a number of individuals from outside of Dharavi. Organizers were excited to see an incredible response to the event, as the venue where it was hosted was bursting at the seams. The event showcased the artwork that had been created by local children and also drew upon a number of well-known artists based in Mumbai.

There were also a number of fun activities for all to take part in. Over the course of two days, organizers took participants back and forth from the newly constructed Shelter building and the local community hall, where the larger activities were taking place. Activities ranged from arts & crafts workshops to a lesson and performance by one of Mumbai’s foremost Capoeira experts (traditional Brazilian martial art/dance).

The local children were quite literally able to make their mark on their new centre as exciting painting activities took over the walls of the Shelter.

The event was a great opportunity for us to reach out to more people that came to learn about the Shelter, but most importantly for the children and residents to engage in a 2 day art event that brought people from outside to step into Dharavi for the first time and learn what this place is really about; a place where ambitions are strong, and aspirations are high, where children have an incredible energy and a capacity to learn and swallow the world if given the opportunity, where the world’s future artists and creative minds exist, where people have the will, the strength and heart to make things change for the better by themselves.

It is a place that needs to be legitimized so that people can synergize all their positive energy into working towards their future rather than battling against a system by which they are deemed illegal, by a system that doesn’t collaborate with the residents to understand who they really are, by a system that wants to use a ‘tabula rasa’ approach and force them all to start from zero all over again. 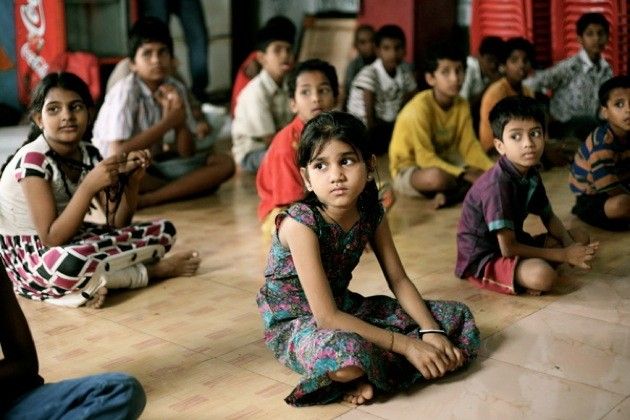 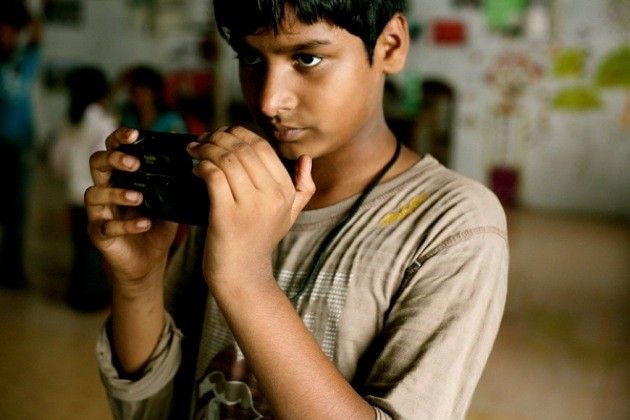 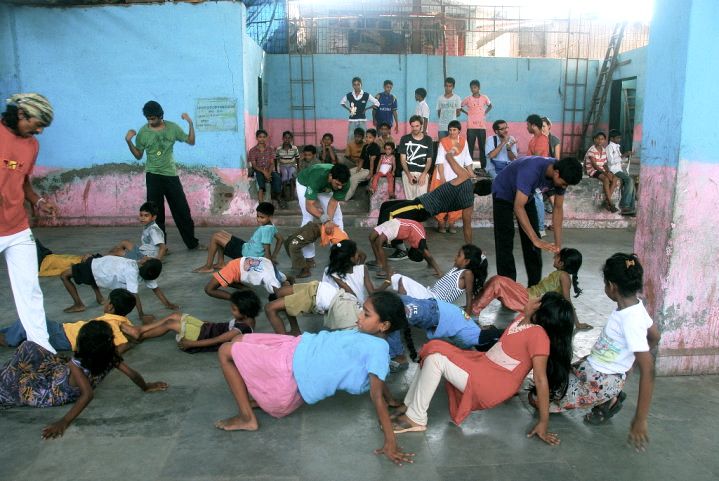 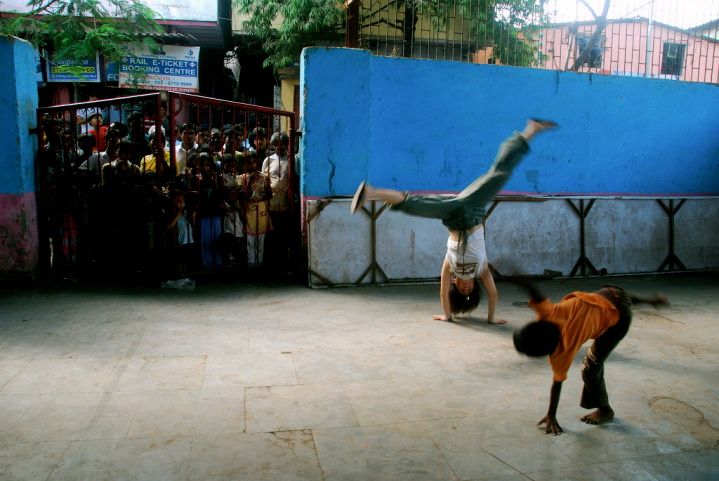 The Shelter is currently open everyday from 1:00pm to 5:00pm, and later during the activities offered on Wednesday and Sunday. Throughout the week, the Shelter is staffed by a local woman who takes the kids through physical fitness exercises and other fun activities, such as arts & crafts and games.

Our mission is to continue to facilitate the development of creative initiatives in this space and collaborate in the connections of people to places – in this case a vibrant neighbourhood that is currently being planned without its residents’ participation.